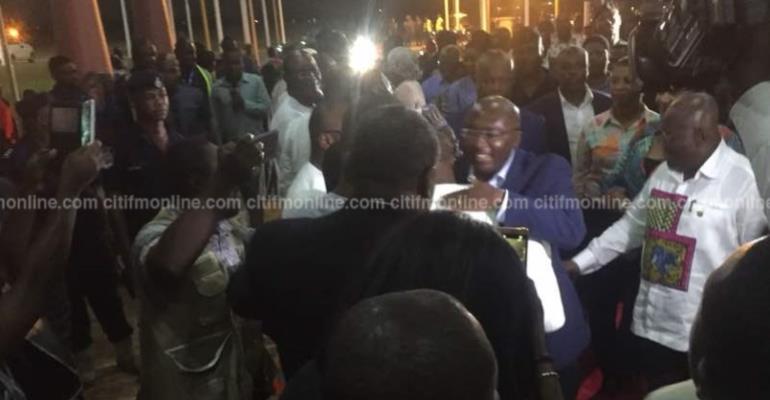 Vice President, Dr. Mahamudu Bawumia, has arrived in Ghana to a rousing welcome at the Kotoka International Airport from the United Kingdom, where he had been for the past twelve days on medical leave.

The Vice President, who touched down from British Airways Flight minutes after 8:00pm, was met by the President Nana Akufo-Addo, and the First Lady, Rebecca Akufo-Addo.

A smiling Dr. Bawumia in a blue suit, and flanked by his wife, was hugged by the President and the First Lady before he entered a car to the VVIP Lounge, where several dignitaries and members of the media had converged for his arrival.

At the VVIP lounge, the Vice President exchanged pleasantries with several ministers of state and members of the government who had lined up to meet him. 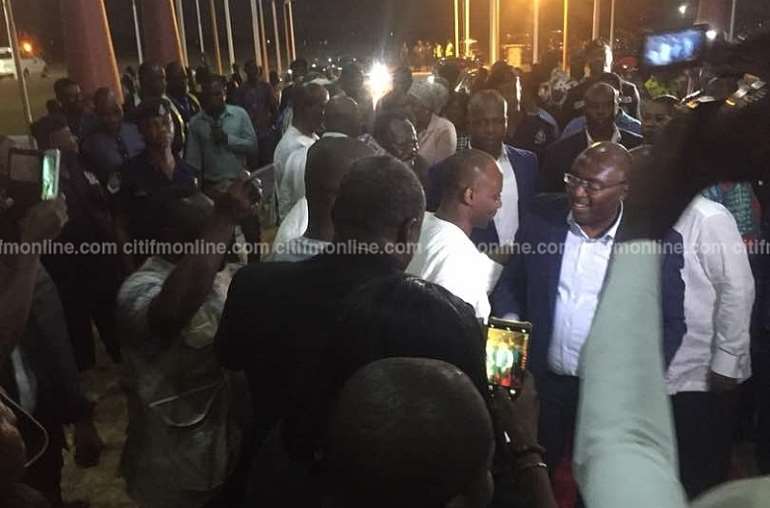 He then sat down with the President, Nana Akufo-Addo, as they engaged in a hearty chat full of smiles.

Some of the government officials and members of the governing New Patriotic Party [NPP] who were at the Airport included the Interior Minister Ambrose Dery, Hackman Owusu Agyemang, Sheikh I.C. Quaye, and Director of Communications at the Presidency, Eugene Arhin among others.

Dr. Bawumia, who’s the Head of the government’s Economic Management Team, left Ghana for the United Kingdom on Friday January 20; after the Presidency revealed that he had been taken ill earlier that day, and had undergone medical tests.

According to a statement signed by the Chief of Staff, Akosua Frema Osei-Opare, the trip became necessary following the advice of Dr. Bawumia’s doctors.

The Information Minister, Mustapha Hamid, later explained that, the decision to fly Dr. Bawumia to the UK was to ensure that he was kept away from visitors who may disturb his rest and recuperation period.

On January 27, during his medical leave, a video emerged of the Vice President taking a stroll on the streets of London with his wife, Samira Bawumia.

At a point in the video, the Second Family stopped to interact with a Ghanaian national who ran over to greet them. 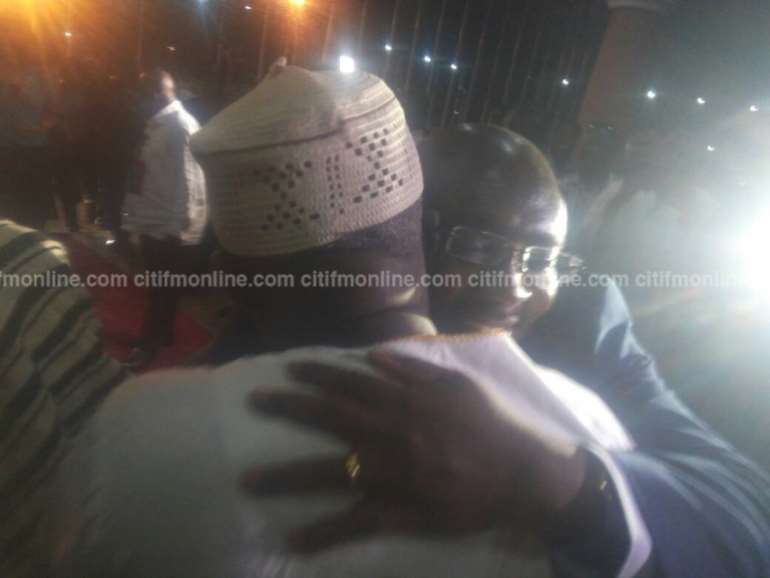 Citi News identified the Ghanaian as Christian Asante, a security officer at a Primark store on the Oxford Street.

Whilst many were excited to see the Vice President in the video, others suggested it was stage-managed to give an impression that he was well, but government may in reality be concealing the true details of his health status from the public.

Some likened the video to the incident where the late President Atta Mills who appeared physically ill, at one-time throttled at the Kotoka International Airport when he had returned from a trip outside, to give an impression that he was healthy.

Others also shifted the argument to the fact that, it was not prudent for the Vice President to have been strolling the streets of London with security, a claim that was dismissed by some government spokespersons.

The video also came at a time the Minority in Parliament had called for full disclosure on the health status of the Vice President.

The Majority Leader in Parliament, Osei Kyei Mensah-Bonsu, however, described the Minority’s call as hypocritical and preposterous.

Prior to those pictures coming out, Samira Bawumia offered some assurances concerning the recovery of the Vice President, saying her husband was “doing very well” and looking “forward to returning to work soon.”