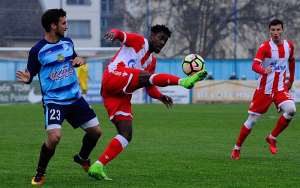 Ghana striker Richmond Boakye-Yiadom will fancy his chances of extending his incredible goalscoring run when Red Star Belgrade clash with CSKA Moscow in the round of 32 of the Europa League.

Red Star have been drawn against the Russian side with the first leg scheduled for Serbia on February 14 and the return in Moscow a week later.

Red Star progressed to the knockout stage as runners of Arsenal’s group while CSKA Moscow slipped to Europa League after finishing third in Champions League group, which had Manchester United and FC Basel.

Red Star will be counting on their star striker Boakye to power them to next stage. Boakye has been in top form this year, scoring over 40 goals.