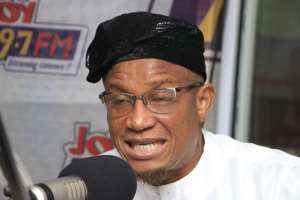 Government has claimed credit for stable supply of power, a position likely to trigger opposition uproar in the credit-taking industry of politicians.

Information Minister, Mustapha Hamid, was keen to impress upon Joy News reporter Parker Wilson that the bygone days of power erraticity is because “we have made the prudent financial decisions that have allowed us to be able to stablise the power”.

Although Ghana hads enough installed generation capacity of 2,930 megawatts (MW) by 2012, it could rarely produce 2,100MW to meet demand.

In a costly spree of assembling power plants, the Mahama administration procured four additional power projects: Karpower barge (225 MW); Ameri Power (250 MW); TICO steam turbine (110 MW); and BXC solar (20 MW) in what was described as the “fastest mobilisation of power in the history of Ghana”.

While announcing an end to power crisis in a February 2016 address to Parliament, Mahama would later add a caveat that “our energy challenges are not over but at least for now, we have been able to fix the problem”

He explained that although government has been able to match demand and supply, several generating assets are gas-based which could trigger a relapse into power rations if government is not able to get enough gas to feed them.

The Information minister Mustapha Hamid would feel the NPP is justified in its view that the energy crisis that plagued the John Mahama administration was down to financial challenges and not technical problems as the NDC had argued.

But the claim will not go unnoticed as the repeat of same by the Finance minister Ken Ofori-Atta during his budget presentation last month was met with boos and jeers from the Minority NDC.

The Minority leader Haruna Iddrisu was in disbelief at the Finance minister’s comment and told the media “we were told that they have provided a reliable electricity, I am sure for lack of a better word, he had wanted to say that he had inherited reliable supply of electricity’’

The NDC has a jealous regard for Mahama’s record and insists that it handed over political power and sufficient electrical power to the NPP in January 2017.

“Dumsor ended as far back as January 2016 and you can check from GRIDCo, these are fact and not opinions”, the Minority has said.