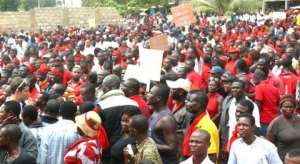 The Executive Director of Northern Patriots in Research and Advocacy (NORPRA), a civil society organisation, BismarkAyorogoAdongo, has disclosed the organisation was mobilising to embark on a massive demonstration in the coming days against the Department of Urban Roads and the Bolgatanga Municipal Assembly, for ignoring the plight of residents and motorists over the deplorable road network within the township.

The sizes of potholes within the township of Bolgatangaare unimaginable. The situation is so terrible that, cases of vehicleaccidents, breakdown of vehicles and motorbikes is no longer news to residents and motorists who ply the road.

Several calls on authorities to get the roads fixed started before the rainy season,but the situation worsened due to heavy rains in the past few weeks, making it a nightmarishexperience for road users to move within the town.

In responding to several complaints by residents and motorists, Mr. Peter Amoako, Upper East Region director of the Department of Urban Roads explained that, there was so much moisture in the soil because it is in the rainy season and any attempt to patch the potholes will be a wasteful venture.

But NORPRA’s Executive Director would not accept any of such excuses. “First of all, why are we crying or why is there public outcry for the need for the roads to be fixed immediately? It is because those dams or rivers that we call potholes are causing havoc.

“There are needless accidents that are occurring on daily basis as motorists, pedestrians, cyclists, drivers try to avoid them butcrash into one another and this is an emergency case that we have at hand. And that is why we are asking the authorities to as a matter of urgency to do something about it.

“So if we are getting the response from departments or agencies or institutions that are mandated and given the task to ensure that we have our roads fixed so that these avoidable accidents and needless deaths will be avoided, but you are getting the response that they can only work on it in the dry season, I think that is regrettable. We cannot wait till such a time.

“These potholes have not just been developed. They saw them during the dry season and they chose to do nothing about them and where they have now reached, I think it is no more a question of what explanation authorities will give it to us.

According to him, on the day of the demonstration, all the affected roads would be blocked and demonstrators would not leave until the authorities fix the roads.

A major portion of pot-hole-ridden roads was the stretch from MTN intersection through the taxi rank, to the Fire Service junction.

It continued to Zuarungu and this stretch had recorded countless road crashes and damages to vehicles and motorbikes.

At the time of speaking to this reporter, Mr. Adongo said a notice to the police was been prepared and as soon as the green light is given, the demonstration would take place next week.