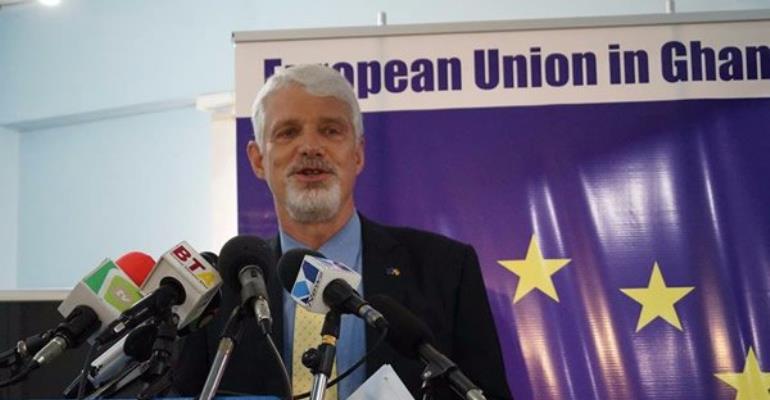 The head of the European Union delegation to Ghana has advised Ghanaians to invest in profitable ventures rather than travelling to Europe only to beg in malls.

William Hanna describes as undignifying, the situation where some Ghanaians allow themselves to be duped by human traffickers into Europe only to be left stranded.

Speaking Friday at a lecture on migration at the University of Ghana, themed “interrogating the forces behind migration from Africa to Europe,” Mr. Hanna recounts how he has seen some Ghanaian migrants begging in European supermarkets just to make ends meet.

“I have a very deep picture in my mind of walking around Rome…and I see Ghanaians begging at supermarkets probably to make some money and I don’t see much dignity in that,” he said.

Related: Ghanaians Migrants Being Sold As Slaves In Libya

Suggesting the cure to this menace, the diplomat said the EU needs a much more intimate collaboration with the Ghanaian government and Civil Society Organizations (CSOs).

He believes all these bodies will help arrest the problem of Ghanaians leaving to find unexisting opportunities across the Sahara.

Meanwhile, some research work by the Centre for Migration Studies at the University of Ghana has revealed that, thousands of Ghanaians who embark on the perilous journey to Europe, do not do so solely because of poverty.

According to Director of the Center who also spoke at the lecture, a number of migrants embark on these journeys for social reasons, like marriage.

Professor Joseph Teye said, it is therefore wrong to assume that all those who move from Africa to Europe go because of poverty.

“Some of the amounts of money, these migrants cough up just to make these trips cannot be afforded by poor people…some pay up to 5000 euros just to make this trips,” he said.

He also noted that the European countries do want Africans to settle in their countries only that this should be done in an orderly manner.

“Nobody is saying migration in itself is bad but irregular migration is bad,” he reiterated.