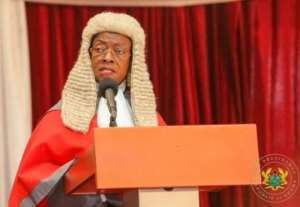 Chief Justice (CJ) Sophia Akuffo has threatened to shut down the Wa District Court in Upper West Region within six months if officials of the Municipal Assembly fail to find suitable location for the Court.

The Court is currently sharing a small structure with the Savannah Accelerated Development Authority (SADA), a situation the CJ described as unacceptable and should not be countenanced in a modern day justice delivery system.

She made the threat while inspecting the facility together with the Wa Municipal Chief Executive (MCE), Mr Issahaku Tahiru Moomin, on her maiden visit to the Region on Wednesday.

This should not be tolerated, she said, especially when according to her some monies have been made available through the District Assemblies Common Fund for improvement of infrastructure for Judicial Services.

The CJ urged both the Regional Minister and the MCE to relocate SADA and leave the structure for the court to use in the interim while they put in measures to get the court a permanent building.

Courts should not be allowed to share structures with other departments and agencies, she said, especially when the judiciary, in recent times, has been accused of underhand dealings.

‘Someone can just be giving money to another on the premises of the court and a passer-by may see and think it is an official of the court’.

She said all these things affect the integrity of the judiciary and should be stop.

Justice Akuffo also visited the Wa Circuit and High courts as well as the residential accommodation of the various judges.

She later inspected a Courts Complex structure that was under construction and had been abandoned for several years.

Justice Akuffo said her visit in the region was to appraise herself of the current conditions of the courts which would inform the kind of solutions to proffer to improve the situation.

She also interacted with members of Judicial Services Association of Ghana (JUSAG) to ascertain their challenges and how to work with them in order to raise their morale for them to give off their best in the justice delivery system.

Wa Naa Pelpuo commended the Chief Justice for being the first Chief Justice to ever visit Upper West, and added it was a demonstration of her strong commitment to improve justice delivery across every part of Ghana.

He appealed to the CJ to allow the Traditional Council to handle land litigation issues to reduce land related disputes on the court.

Mr Issahaku noted that though the courts were not in the best of states there was absolute confidence in the competency of its staff.