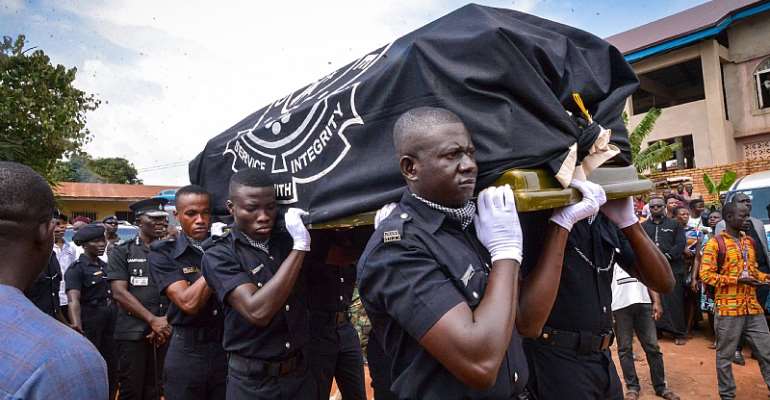 Vice President Dr Mahamudu Bawumia has urged Ghanaians to remember that peace and security are two cardinal necessities in life and that those who have elected to sacrifice to help us maintain peace and order ought to be respected and protected.

It is, therefore, necessary for “Ghanaians to see the police and security officers as our family members, friends and protectors,” he admonished.

The Vice-President made this call on the occasion of the burial of L/CPL Awal Mohammed one of the two police officers slain in the line of duty on Wednesday 28th August 2008 in Kumasi.

Extending heartfelt condolences on behalf of President Nana Addo Dankwa Akufo-Addo, and the entire government to the family, Vice President Bawumia expressed confidence in the IGP and his men to work hard towards bringing “the perpetrators of this dastardly act to book” and announced a GHC 10,000 reward for information leading to the capture of any of the perpetrators on the run.

On the continued safety of police officers, Vice President Bawumia announced that 4500 bullet proof vests have been delivered to the Police to help stem these unfortunate incidents and urged them to wear the bullet proof vests and not say that they are uncomfortable to wear.

Lamenting the situation where 5 unarmed police officers have been killed by criminals in the last month, He indicated that, henceforth all officers of the Police Motor Traffic and Transport Department (MTTD) will now be armed to ensure their protection and that officers who go on “outside duties” will now be armed with weapons, bulletproof vests and helmets to be able to protect themselves.

“Other logistical items have been delivered to the Police including non-lethal weapons. The government will continue to support the Police and more logistics will be delivered soon. We must protect our police for them to be able to protect us,” he added.

He asked for the de-politicisation of such matters as it bothered strictly on security and touched on the resolution of compensation and the enhanced packages for officers who die or are injured in the line of duty.

Dr. Bawumia concluded by reiterating the call for public support for the Police to enable them effectively discharge their mandate.