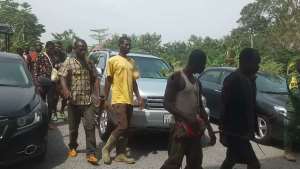 The Convicts being taken away to start their jail term

Thirteen illegal miners who destroyed water bodies in the Eastern Region were yesterday jailed three years each by the Koforidua Circuit Court.

The judge, Mercy Adei-Kotei, sentenced the 13 after they had pleaded guilty to charges of conspiracy to commit crime and mining without licence.

Presenting the facts of the case, Assistant State Attorney, Cyril Boateng Keteku, said the convicts were arrested by a taskforce of the Forestry Services Commission at Akwatia in the Denkyembuor District of the Eastern Region.

The prosecutor indicated that the taskforce arrested the 13 convicts on January 8, 2018 in the Atiwa Forest as they were mining without licence.